ORLANDO, Fla – Are New Yorkers, specifically those from the city, coming to Florida? Yes!

Are all New York City residents fleeing to the Sunshine State? No. Florida had a significant increase in movers from NYC in 2020, but many states benefitted from the area’s out-migration.

Although definitive migration data, such as information tracked by the U.S. Census Bureau, is not yet available for 2020, change-of-address filings from the United States Postal Service (USPS) provide insight into the patterns expected once that data comes out.

Before diving into the data, a few nuances should be noted: Permanent residential change-of-address filings (combining both individual and family) are not a perfect measure of people moving. First, individuals filing represent one mover, but the number of people associated with one family filing cannot be determined. Additionally, duplicate filings could occur (such as a family with different last names at the same address), or a mover may not submit a filing with the USPS at all.

Migration patterns for most of the U.S. were remarkably similar in 2020 to those of both 2018 and 2019. However, a few densely populated cities experienced a dramatic change of filings compared to prior years. According to USPS permanent filings, the number of individuals and families leaving New York City for a new state to call home jumped 47% from 2019 to 2020.

To add perspective in “people terms,” that’s an additional 58,000 individuals and 11,000 families leaving the Big Apple!

While state shares remained steady, the total number of New York City movers to Florida still increased roughly 41%. Some states (those nearby like Vermont, New Hampshire, Maine and Connecticut) saw triple-digit gains in the number of movers.

Out of New York City’s five boroughs, Manhattan had the largest increase (71%) in out-of-state permanent change-of-address filings in 2020. There were over 9,500 filings by Manhattanites moving to Florida in 2020, a staggering 81% increase from 2019.

Where specifically are these wealthy Manhattanites migrating in the Sunshine State? For the most part, they’re moving to the same places they always have, just in greater numbers.

Headlines circulating in newspapers focus on a flock of wealth to Miami, and it’s true that South Florida continued to charm the most Manhattanites to its sunny shores. Miami-Dade, Palm Beach and Broward counties raked in an additional 2,710 residential filings in 2020. On the whole, Florida saw an increase of approximately 4,300, so South Florida accounts for over half of the state’s gain.

In percentage terms, though, most counties throughout the state saw significant increases in relocations from Manhattan in 2020. Some of the largest increases occurred in coastal counties with ample amounts of low-density luxury development, particularly in Southwest Florida and along much of the Atlantic coast from Jacksonville down to the South Florida metro area.

The Florida Keys saw the largest increase, however, with address changes from Manhattan to Monroe County increasing by 208% from 2019 to 2020. 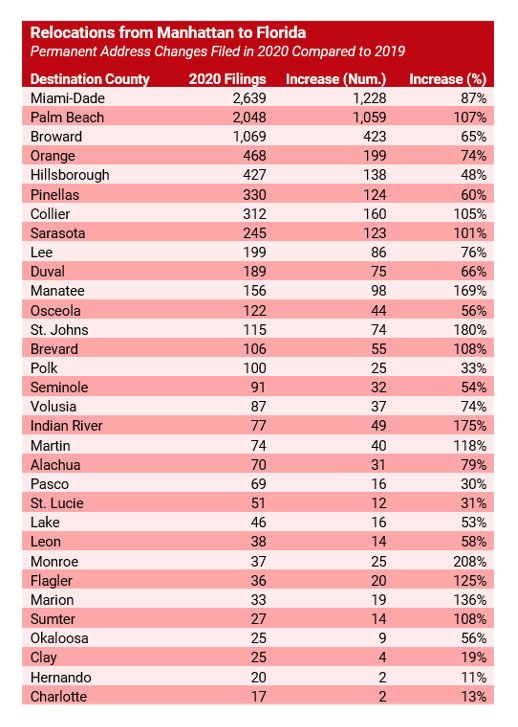 These figures suggest that affluent Manhattanites are making a significant impact in Florida’s luxury home market – and Florida Realtors® is seeing it in the housing market data.

The association’s year-end statistics revealed that over 16,000 Florida homes sold for at least $1 million in 2020 – a 46% increase from 2019. It’s likely that many of these additional buyers came from Manhattan, including many second or vacation homebuyers who did not permanently relocate to Florida (yet, at least).

The biggest winner of the exodus from New York City depends on how you look at the data. Some states had larger volume increases from 2019, while others saw greater percentage growth. But it’s evident Florida’s real estate market, primarily in the luxury segment, benefited from increased migration out of the Big Apple in 2020.

As vaccine distribution continues through 2021, we’ll see if the pull to leave the city is as strong in 2021 and what slice of the pie Florida can attract.