Skip to main content
Hurricane Relief: Click here to access the Disaster Relief Fund
Floridarealtors.org will be undergoing maintenance between 10:00 PM and 10:15 PM Tuesday, November 29th. Some tools may not be available. Form Simplicity will not be affected.
News & Media

U.S. housing discrimination has a long history, from redlining to VA loan policies. But if legal problems are solved, would an adequate housing supply do the rest?

WASHINGTON – The nation’s housing shortage has also fueled a housing inequity problem, Bryan Greene, vice president of policy advocacy for the National Association of Realtors® (NAR), writes in an essay included in a new report, “Housing Underproduction in the U.S.”

To close the widening racial gap in ownership, housing’s underproduction must be widely addressed, he notes.

But that problem is only worsening: The Up for Growth report puts a new number on the nation’s housing shortage – 3.8 million homes, more than double where it stood in 2012. The deepening inventory crisis is widening in scope, affecting urban, suburban and rural areas alike, and hitting certain minority groups particularly hard, according to the report. 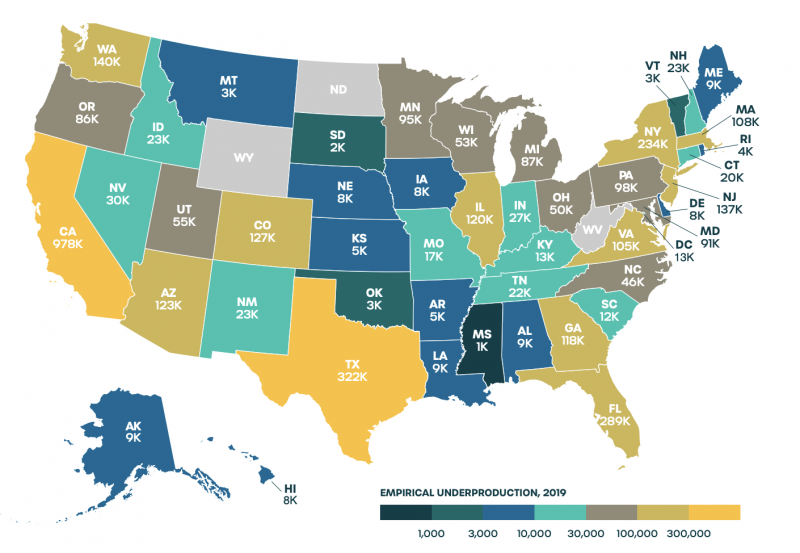 Housing Underproduction in the U.S.

Source: “Housing Underproduction in the U.S.”

“Underproduction in this country has many causes,” Greene writes. “Local zoning and land-use restrictions have, for decades, proved to be one of the greatest barriers to housing construction, affordable housing and diverse communities.”

The report notes long historical racial inequities in access to housing, such as from past discriminatory government grants and programs, widespread exclusionary zoning policies originally designed with racial segregation in mind, racially restrictive covenants written into home deeds from the 1910s to the 1940s, redlining practices that limited access to capital investments to prospective homeowners of color, and urban renewal projects that caused displacement and gentrification. These have led to a widening racial wealth gap that has stretched over generations and has made it more difficult for families of color to qualify for loans and afford homeownership, according to the report.

The gap between Black and white homeownership rates has widened over recent years. These historic and systemic constraints combined with housing underproduction and high prices make homeownership even less attainable for buyers of color, the report notes.

In a report released earlier this year, NAR called record-high home prices and record-low housing inventories “double trouble” for real estate, particularly for Black Americans. The report found that about half of the homes for sale would require a household income of $100,000 or more to purchase.

That has placed homeownership increasingly out of reach for a number of households: 50% of Asians, 65% of Whites, 75% of Hispanics and 80% of Blacks do not earn enough income to buy these homes, the report notes.

Where to go from here

Housing supply and housing equity can be addressed on multiple fronts, such as by expanding the types of housing available for greater income levels and a broadening focus on land use.

NAR continues to advocate for tax code incentives to promote zoning and land-use changes, such as tax credits or other support to communities that ease zoning rules that had been limiting the supply of homes, such as minimum lot sizes and bans on multifamily housing. Such policies can not only help ease housing shortages but ultimately help expand housing opportunities to more people, Greene writes.

“For more than a half-century we’ve witnessed how land-use decisions can limit housing development, affordability and equity,” Greene notes. “We cannot stand by and lament this lack of progress. Now, it is time to act.”