MIAMI – Under the Florida Condominium Act, transfer fees can’t exceed “$100 per person or married couple in connection with the sale, lease or transfer of a condo unit” – a limit that’s often ignored. However, that may change.

Few condo dwellers know that a $100 cap exists, and those that do rarely complain, in part because they fear losing out on the apartment. The process of contesting a fee 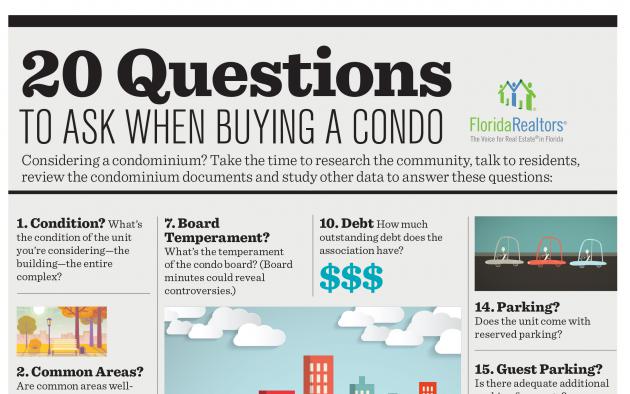 20 Questions to Ask When Buying a Condo

Be sure to take the time to research the community, talk to residents, review the condominium documents and study other data.
Download the infographic
►

and actually receiving a refund can also be arduous and expensive.

A successful class action lawsuit may change that, however.

In the suit, Joshua and Allison Kobasky claimed that The Plaza 851 Brickell Condominium Association charged them $350 to move in ($150 for screening, $200 as a move in/move out fee), or $250 more than allowable under Florida law. The case then became a class action lawsuit and also included other tenants in the same complex. The class period for the settlement ran from Jan. 5, 2014, to June 3, 2019.

“They know people need a place to live, and in most cases the inflated fees are not thousands of dollars,” attorney Aaron Resnick, the plaintiffs’ representative in the Plaza lawsuit, told the Miami Herald. “Most people will go ahead and pay $250 if it means getting their apartment quicker.”

The judge in the lawsuit also ordered the condo association to pay $95,000 in attorney fees to the law firms representing the tenants. That, though, could create an incentive for other law firms to seek out condo tenants who paid over $100 with offers of representation. Each participating condo tenant will receive $250, or 100% of the money allegedly charged over the allowed $100.

“The transfer fee statute is unclear, and almost no Florida appellate case law exists on this topic,” Evelyn Greenstone Kammet, the attorney who represented the association, told the Miami Herald. “Considering the amount paid out to class members, as opposed to the amount paid to plaintiffs’ attorneys, it seems the attorneys had the most to gain.”

There are currently four other active class action lawsuits over condo fees in Miami Beach.

In the past, condo tenants who paid more than $100 could file a complaint with the Florida Department of Business and Professional Regulations (DBPR), but Patrick R. Fargason, DBPR deputy communications director, said DBPR received only eight complaints over the past year.

During that same time, DBPR closed 17 complaints filed earlier, but five resulted in either “no violation” or weren’t investigated. “Twelve of them were resolved with an ‘Informational Letter’ designed to educate the condo association about the law and mandate the refund of excess fees,” according to the Miami Herald.

Fines from DBPR may go up for condo boards, however. On Dec. 5, 2018, the Florida Administrative Code was changed and now allows DBPR to charge $5,000 per violation.