Foreclosures: Closing in on Pre-Pandemic ‘Normal’

Attom: Foreclosures remain low but might hit normal “sometime in early 2023.” Fla. ranks sixth nationwide, with one foreclosure for every 560 homes with a loan.

The number includes the first six months of 2022 and is 153% higher year-to-year, but the figures are skewed by numbers generated during the pandemic when government orders slowed the process. 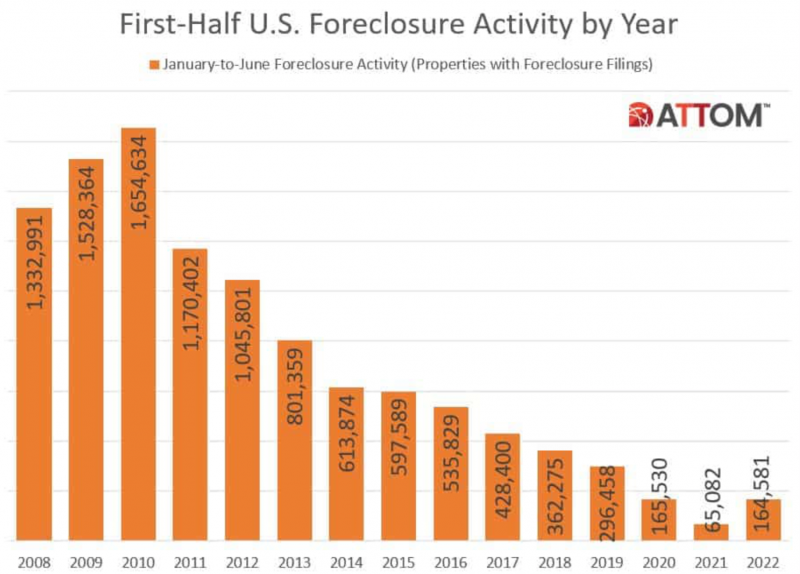 “Foreclosure activity across the United States continued its slow, steady climb back to pre-pandemic levels in the first half of 2022,” said Rick Sharga, executive vice president of market intelligence at ATTOM. “While overall foreclosure activity is still running significantly below historic averages, the dramatic increase in foreclosure starts suggests that we may be back to normal levels by sometime in early 2023.”

Of the 223 metro areas Attom analyzed, it saw a decrease in foreclosures in only seven of them – none in Florida.

“It’s important to note that many of the foreclosure starts we’re seeing today – in fact, much of the overall foreclosure activity we’re seeing right now – is on loans that were either already in foreclosure or were more than 120 days delinquent prior to the pandemic,” Sharga says.

“Many of these loans were protected by the government’s foreclosure moratorium, or they would have already been foreclosed on two years ago. There’s very little delinquency or default activity that’s truly new in the numbers we’re tracking.”