Form Simplicity will be undergoing maintenance between 1:00 AM and 3:00 AM on Wednesday, Dec 7th which may include brief downtime. FloridaRealtors.org will not be affected.
News & Media

GAINESVILLE, Fla. – After four consecutive months of modest increments, consumer sentiment among Floridians dropped 3.4 points in October to 61.1 from a revised figure of 64.5 in September.

“The decline in October comes as no surprise as this month’s reading captures the impact of Hurricane Ian, which made landfall Sept. 28 in Southwest Florida and caused business closures, job losses, extensive property damage and significant human loss,” says Hector H. Sandoval, director of the Economic Analysis Program at UF’s Bureau of Economic and Business Research at the University of Florida (UF).

But Ian’s impact on confidence is probably temporary.

“Despite the damaged caused by Hurricane Ian, the storm is unlikely to have a lasting effect on the state’s future economic prospects,” Sandoval says. “Furthermore, in terms of consumer confidence, the effects of such disasters tend to be short-lived.”

Among the five components that make up the index, four declined and one increased.

Current conditions: Floridians’ opinions about current economic conditions were pessimistic. Their views of personal finances now compared with a year ago decreased 3.5 points from 54 to 50.5.

Similarly, opinions as to whether now is a good time to buy a major household item like an appliance declined 4.8 points from 53.8 to 49.

“Notably, Floridians’ opinions about whether now is a good time to purchase a big-ticket item reached their second-lowest level in record since the series began tracking consumer confidence in 1985,” Sandoval says. “The drop is not surprising since elevated inflation continues to drive up the cost of living and consumers are cutting back on unnecessary purchases. However, the decline in this component signals a pullback in discretionary spending indicating troubles for retailers during the holiday shopping season.”

Expectations about U.S. economic conditions over the next year showed the greatest decline in October, dropping 9.3 points from 67 to 57.7.

However, the outlook for U.S. economic conditions over the next five years increased six-tenths of a point from 70.2 to 70.8.

“Inflation remains elevated, leading the Fed to continue raising interest rates, increasing the likelihood of a recession. As consumers are likely to react pessimistically, looking ahead, we expect consumer sentiment to remain depressed,” Sandoval says. 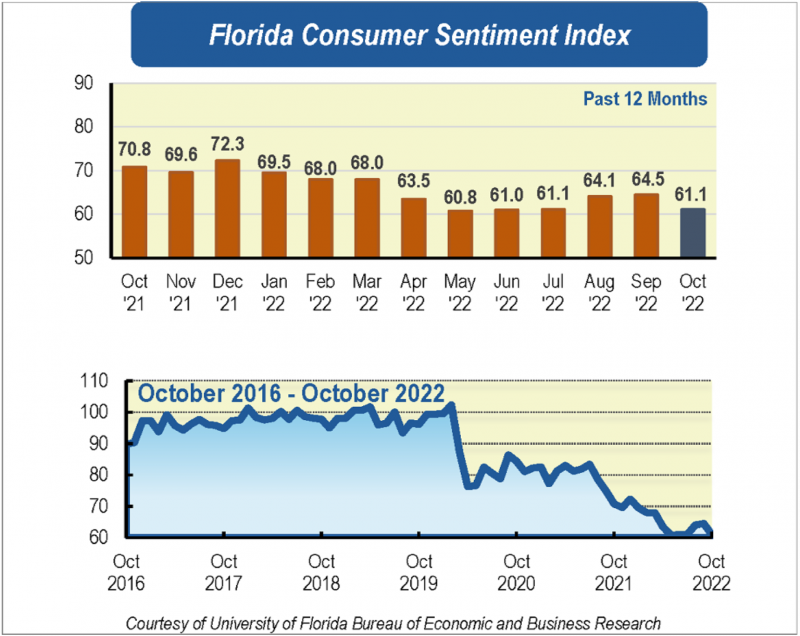 The UF study reflects the responses of a demographic cross section of Florida. The index is benchmarked to 1966, which means a value of 100 represents the same level of confidence for that year. The lowest index possible is a 2, the highest is 150.