Consumer confidence among Floridians barely increased last month (64.1 in Aug. to 64.2 in Sept.) in UF’s latest survey, but it continued its positive direction.

GAINESVILLE, Fla. – Consumer sentiment among Floridians inched up one-tenth of a point in September to 64.2 from a revised figure of 64.1 in August. The September survey concluded before Hurricane Ian crossed the state.

“While the total economic impacts associated with Hurricane Ian are unknown so far, it creates an additional pressure to the state’s economy” Sandoval says Hector H. Sandoval, director of the Economic Analysis Program at UF’s Bureau of Economic and Business Research.

Among the five components that make up the index, two increased and three decreased.

Current conditions: Opinions about current economic conditions move lower. Florida residents’ view of their personal financial situations now compared with a year ago decreased slightly by four-tenths of a point, from 53.8 to 53.4.

Opinions as to whether it’s a good time to buy a major household item, like an appliance, declined by one-tenth of a point from 54.1 to 54.0.

However, the outlook of U.S. economic conditions over the next five years decreased slightly less than a full point, going from 70.4 to 69.6.

“Floridians are slightly more optimistic in September. Despite this positive change, confidence remains low at levels that are comparable to those observed during the Great Recession,” says Sandoval.

“Looking ahead, we expect consumer sentiment to decline in the coming months as the economy slows down due to interest rate hikes and the decline in economic activity brought by Hurricane Ian,” Sandoval says. 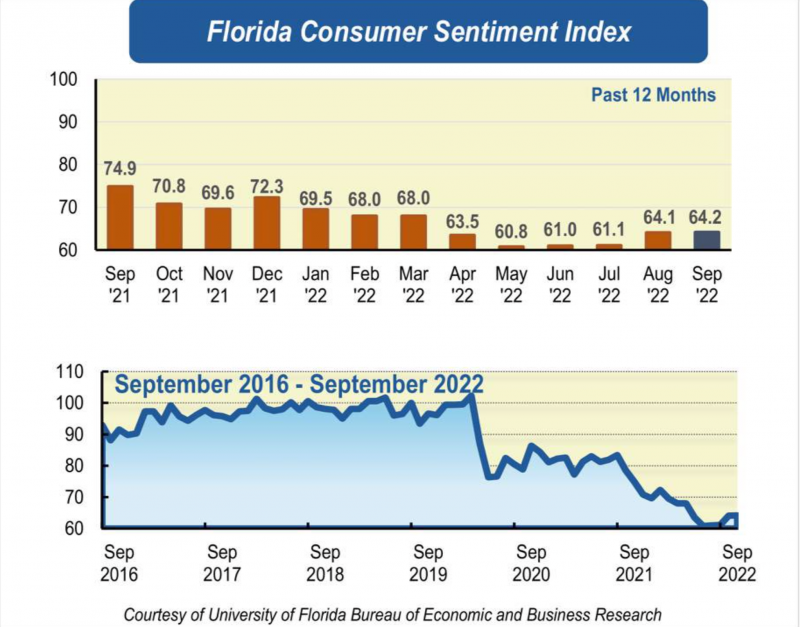 The UF study reflects the responses of 174 individuals reached on cellphones and 283 reached through an online panel, a total of 457 individuals, representing a demographic cross section of Florida. The index is benchmarked to 1966, which means a value of 100 represents the same level of confidence for that year. The lowest index possible is a 2, the highest is 150.