Bucking a national trend, Sunshine State consumers expressed more positive attitudes about their current conditions and the future, both short- and long-term.

GAINESVILLE, Fla. – Consumer sentiment among Floridians increased in November to 64.7, up 1.8 points from a revised figure of 62.9 in October, even as sentiment nationwide declined a bit.

According to the monthly study by the University of Florida, all five components that make up the complete index increased.

Current conditions: Perceptions of personal financial situations now compared with a year ago increased 1.9 points, from 51.9 to 53.8. And opinions on whether it’s a good time to buy a major household item like an appliance or even a home increased by 3.7 points, from 50.1 to 53.8, the greatest increase of any reading this month. That uptick was true in almost all demographic groups.

Future expectations: Expectations for personal finances one year from now increased slightly – one-tenth of a point from 79.7 to 79.8.

Expectations for U.S. economic conditions over the next year increased 2.5 points, from 60.2 to 62.7. Almost all Floridians felt better about the future one year from now; the UF survey notes that it’s even stronger among lower-income households, those people with an annual income under $50,000.

That optimism extends a full five years out, though with less of a month-to-month increase. Views of U.S. economic conditions over that time increased nine-tenths of a point from 72.8 to 73.7.

One reason for optimism: Florida’s labor market remains strong. The state’s labor force participation rate reached 59.6 – equal to the recent peak observed prior to the pandemic. And while weekly jobless benefits claims increased due to Hurricane Ian, they’ve now declined to low levels seen before the storm. 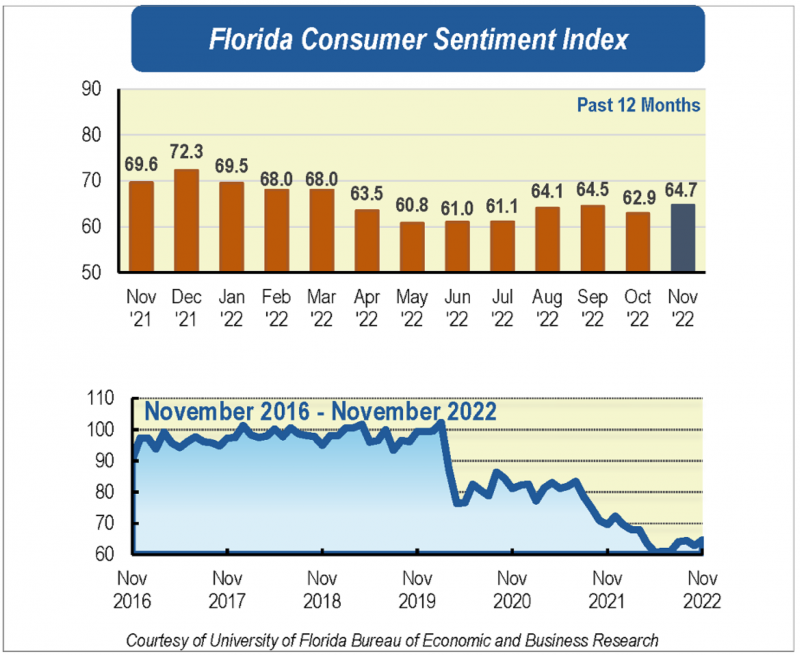 Conducted October 1 through November 24, the UF study is benchmarked to 1966, which means a value of 100 represents the same level of confidence for that year. The lowest index possible is a 2, the highest is 150.